Government-involvement is the most significant differentiator between craft brewing and homebrewing. So importantly we submitted the first of our three-levels of licensing with the federal TTB Brewer’s Notice! Filling out the online forms wasn’t daunting because we had already lined up most of the necessary documents. We did make the mistake of uploading a place-holder version of our layout; it turns out you can’t delete/replace documents once they are uploaded. We’ll keep things going by submitting our Maryland license application in February.

We met with Sorrel Design to play around with the layout of the brewhouse, tanks, and barrel room. We won’t be able to do everything before opening, but it is good to start with the master plan, so everything works towards that end goal. We continue to chip away at our ever-growing to-do list of tasting room beautification projects. Much like moving into a new house, our initial focus is on cleaning, drywall work, painting, and planning. Early in January, Columbia.MD.Life stopped by the brewery to chat with Scott about Sapwood Cellars plans and to get a peak of the brewery and tasting room. Check out the article and pictures of our progress!

Microbe acquisition and propagation for our barrel program kicked-off. There are numerous blends and isolates available from a dozen or so passionate yeast labs. We already have cultures from White Labs, Wyeast, GigaYeast, Bootleg Biology, Omega, East Coast Yeast, The Yeast Bay, and Imperial Yeast. We’re embracing our small scale, the goal isn’t to produce as much consistently-funky beer as possible, but to have a huge palate of flavors for blending options. We’re looking for balanced beers: more tart than sour more hay-lemon than barnyard. More on alternative microbe sources in another post. 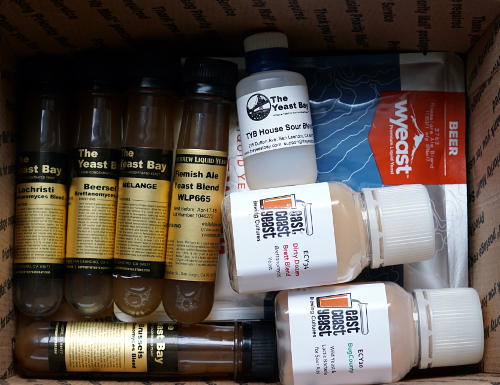 Test batches for the hoppy beers are well underway. Mike brewed a session oat ale with a blend of English, Belgian, and German yeast. Working towards an easy-drinking hoppy beer for those who aren’t into IPAs. It’ll share some of the citrusy and yeasty notes of a wit, but without the spices. Check out the video of the brewing process.

Each of us will be pouring test batches on 2/16 at Love Thy Beer: Winter Warmer Showcase in Silver Spring, MD. Mike brewed a juicy DIPA with Citra and Galaxy, the first iteration of our Cheater Hops series with hop varieties so good we don’t have to do much work! Big pineapple and orange supported by just a touch of malt sweetness. Scott brewed Oat Pillows, a soft oat-filled hazy IPA dry hopped in multiple stages with Nelson Sauvin, Mosaic, and Simcoe lupulin. Scott also brewed a fun double hazy IPA and white wine hybrid. Named Concentrated, the beer is made like a typical hazy IPA but bumped up to double IPA territory with a mid-fermentation addition of white wine concentrate and a blend of wine yeast to accompany the light dry hop additions of two wine-like hop varieties of Nelson Sauvin and Hallertau Blanc.