Saturday, September 7th at noon, we’ll release the first bottles from the Sapwood Cellars barrel program (is our name finally starting to make sense?)! No Beginnings started as House Saison #1, brewed August 2018. It spent most of the intervening year in oak barrels that previously held Sauvignon Blanc wine. In addition to our house culture, each barrel received a unique mix of Brettanomyces (the wild yeast responsible for creating fruity and funky aromatics). The combination provided a variety of aromatics with white wine leading, followed by notes of hay, lemon, and minerals. 7.2% ABV, $13/500 mL bottle, limit two per person. One keg will be on draft if you want to sample it before committing to bottles.

We realize that more and more beers like this are sweet, sour, and intensely fruited, produced in just a few weeks. This beer isn’t any of those things. “Juice” sours are undoubtedly delicious. Beers like Atomic Apricot and Plutonium Peach are our take on them, relying on fruit puree for ease of brewing and cost. What these beers have in intense flavor, they lack in subtlety. The beers from our barrels are focused on mixed fermentation (each of our 50 barrels has a unique culture), blending, and the highest quality local ingredients whenever possible. No Beginnings is our way of introducing the overall direction of our program, and the subtle but complex flavors that we love.

While this release isn’t sour or loaded with fruit, several of our following bottles will be. Next up will be a tart ale aged on Chardonnay pomace (pressed grape skins) from a local natural winery, followed by a refermentation on Cabernet Franc grapes with wine yeast. Then two sour fruit beers, first a sour red aged in Bourbon and Pinot Noir barrels with dried sour and then fresh sour cherries from Baugher’s Orchards in Westminster, MD. Second, a pale sour that we conditioned on 250 lbs each White Lady peaches and white nectarines from Milbrurn’s Orchards in Elkton, MD. In the pipeline for later this year, we’ve got a sour dark saison, a barrel-aged apple tripel, and a strong sour red in port barrels! 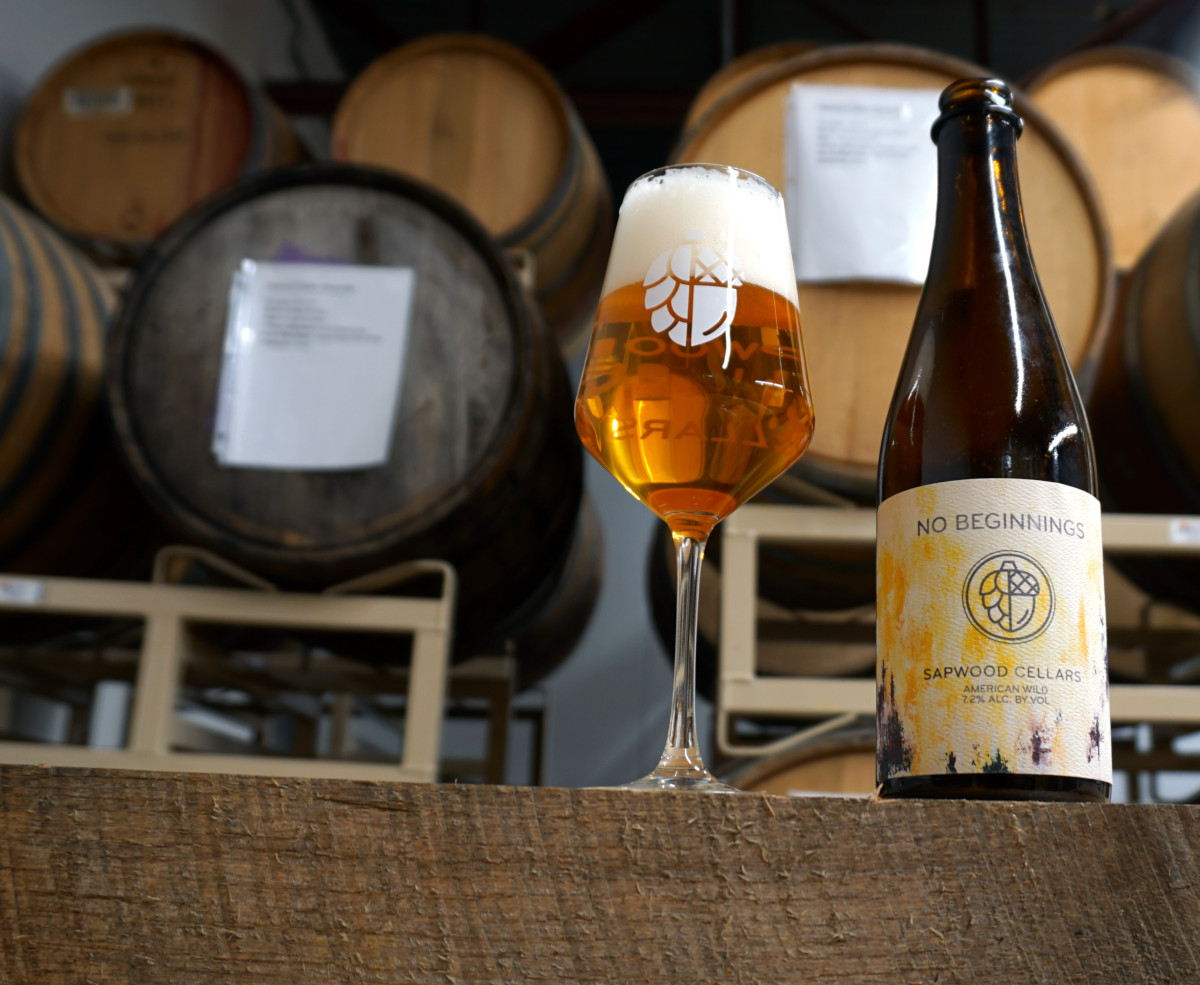 These barrel-aged mixed-fermentation projects aren’t nearly as predictable as our IPAs and quick-sours. Most of that is a result of the larger number of variables (fermentation, barrels, time, fruit, and wild yeast). That’s where blending comes in. We sit down and taste a set of barrels that all started with the same base beer to make decisions on which would benefit from fruit, dry hopping, or another flavor addition. Others might fit together, for example, one that is too acidic with another not acidic enough. Others may need more time, and there will be those with off-flavors that unfortunately will need to be dumped. As time goes on, we’ll be able to blend across years and beers to blend unique creations! We recently had our first blender for a day, if you’re interested we have Blending Sessions available.

Once we decide on a blend, we transfer the selected barrels to our blending tank. There we can cool it to help precipitate solids (fruit pulp, for example) and add a small amount of carbon dioxide to give us a known starting point. We add a sugar solution which is fermented in the bottle providing the remaining carbonation. Most of our beers will spend months in the bottle before release to ensure stable carbonation, and desired flavor characteristics. While many of the beers are suitable for aging in a cool dark place, we’ve given them the required time before you buy it. So you can drink them right away or choose to cellar!

You may have noticed the decanter basket painting on the wall of the tasting room. It’s by Dustin Sinner, who also did the labels for No Beginnings. A decanter basket holds the bottle at a 30-degree angle, preventing subsequent pours from stirring up the sediment at the bottom of the bottle. We’ll have our own decanter baskets for sale in the tasting room. They were made by Day Basket Co. of Elkton Maryland. They are woven from oak, and fit our 500 mL bottles with an optional insert for 750 mL bottles. A basket isn’t required; in fact, some drinkers prefer the sediment to be mixed in. If you don’t, give the beer a slow, steady pour all at once into one or more glasses. The first set of baskets are going to our Founders and Wood club members, but we’ll have them for sale in the tasting room soon too! 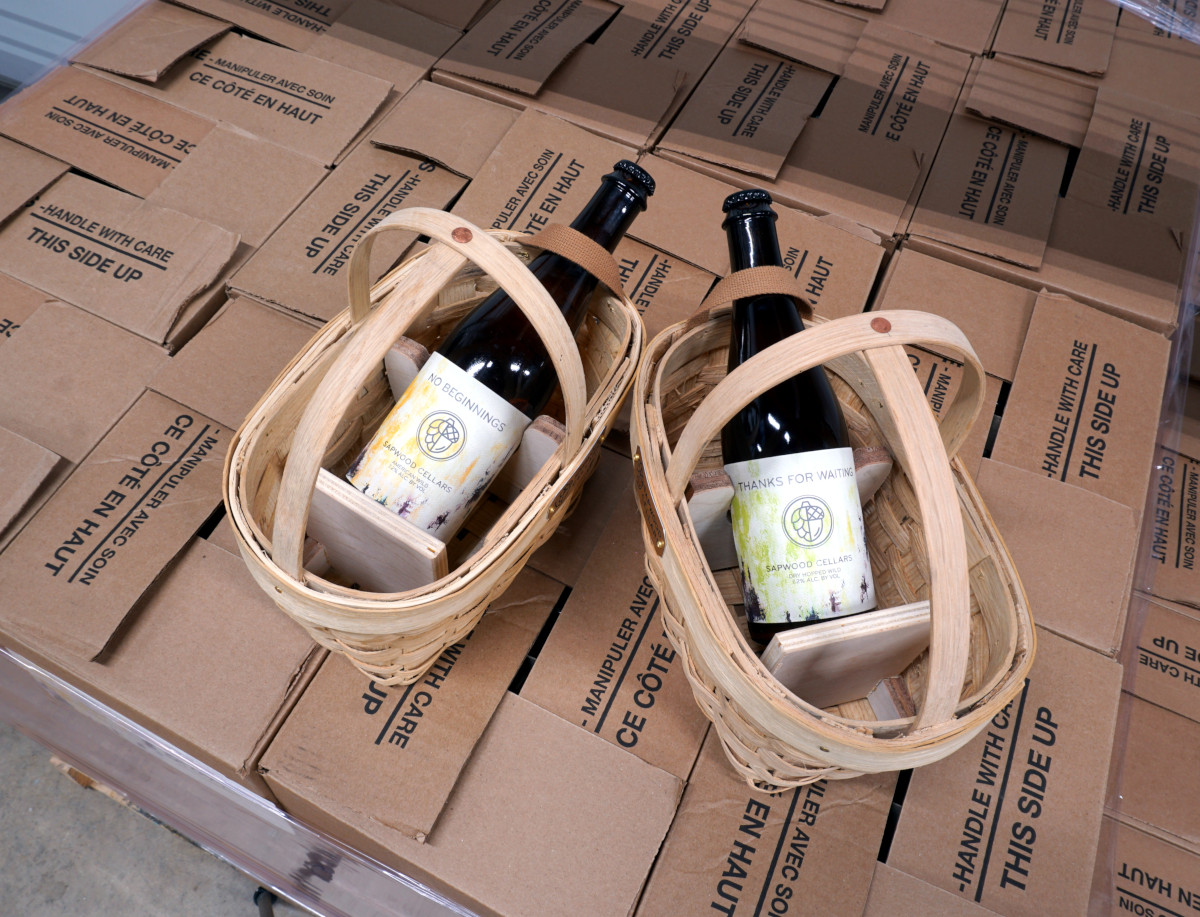